Back in 2016, I posted an article on laboratory testing for cement slurries. In this article, I briefly referred to the changes in the preparation of the slurry in the laboratory, to account for the additional mixing energy typical in small slurry volume jobs using a batch-mixer. (Like in coiled tubing/CT operations).

A typical use for additional blending time

It is common in CT service companies to increase the time in the blender at 12,000 rpm. The purpose is to ‘simulate’ the additional mixing energy created, not only inside the batch-mixer but also through the CT when compared with the mixing energy derived from the standard API procedure. This knowledge has widely known for the last two decades.

Recently I found an article published in 1996, with some interesting conclusions about the effect of mixing energy on slurry properties. The article, in fact, concludes that mixing energy is not as important as shear rate.

Below are some relevant findings in this study:

Here there is some good and bad news for CT engineers. The most important is that even if total mixing energy is higher when using the batch-mixer, the rate at which shear is applied is lower than lab equipment. This could lead to differences, the most important being rheology, a critical factor CT cementing.

Recently, I experienced the difference between laboratory and field equipment for a small cement slurry volume. In this case, the ‘standard’ additional mixing energy calculation was done and applied in the laboratory slurry preparation. All test protocols were followed for both the pilot testing and testing using field mix water. All slurry properties were in range for CT cementing and as intended.

However, during field mixing the slurry changed dramatically deviating from the expected behavior seen in the lab. Specifically, the slurry displayed high viscosity and gel strength development, which eventually caused the job to be aborted. Later during a yard test, again the slurry showed the similar behavior that was completely different from the performance in the laboratory.

Here is an older example, this one from my earlier days. The effect of mixing energy was investigated prior to a small volume cementing operation (cement squeeze) a using batch-mixer. We saw the following results. 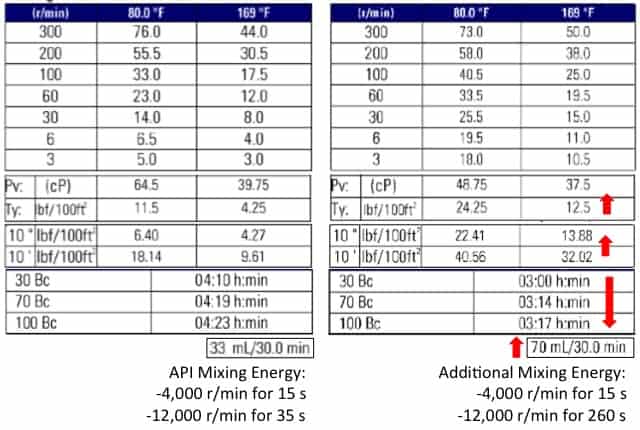 In this case, we simulated the additional mixing energy with an extended time at 12,000 rpm. This caused an increase in Yield Point, Gel development, fluid loss and a decreased in thickening time. The cement slurry needed to be redesigned to counteract this effect and keep the properties in range to achieve the operational conditions and objectives.

As the article concludes:

“The cement mixing process is not completely understood. The various cement types and a large number of additives contribute significantly to the complexity”.

Reproducing mixing energy in the laboratory, using standard formulas, is definitely more practical and easy to implement. But, if the shear rate is more relevant to the final properties, the risk of experiencing unwanted cement slurry behavior in the field remains.

Looking forward to your feedback

Lenin Diaz is an oil industry specialist with 24 years of technical and operational expertise in fluids, cementing, water control and shut-off. A distinguished track record spanning BP, Schlumberger, and NAPESCO. Lenin lives in Tenerife, Spain and is the creator of this website. Read More…

For more than 24 years, I have worked in oil well cementing, offering my services to some of the largest oil corporations in the world and committing myself to excellence. I have mastered my role, and in doing so, I have accrued a skill set that is extremely valuable to my fellow professionals. Eager to do whatever I can to help them, I have owned and operated Better Cementing for All since 2016.
Let me tell you what Better Cementing for All does and what it means. A resource for all oil industry professionals and for cementers both established and prospective, this is a non-profit resource that I established in order to do nothing but serve and make an impact on people who are looking to build careers for themselves in cementing.
From primary cementing to remedial cementing to plug cementing to post-job results, I do it all, and I am comfortable answering in-depth questions about each and every one of these topics. I also offer tools and tips for jobseekers, general self-development advice, and guidance for equipment choices. TO put it simply, this is the go-to spot for anyone who wants to know anything about oil well cementing.
The problem, however, is that covid-19 has made the structure of the website seem untenable. I am trying to juggle the work that I do and my non-profit initiatives and finding it all unhealthy and unsustainable. I want to keep Better Cementing for All up and running, but to do that, I need your help.

In recent weeks, I received some reader requests to include cement job processes or procedures as … END_OF_DOCUMENT_TOKEN_TO_BE_REPLACED

This article will provide you with some actionable suggestions for cementing across permeable zones. … END_OF_DOCUMENT_TOKEN_TO_BE_REPLACED

Forensic is a term usually associated with crimes. Criminal forensics is the use of science to … END_OF_DOCUMENT_TOKEN_TO_BE_REPLACED

First, here is a handy table to simplify the process of cement slurry design: Additive … END_OF_DOCUMENT_TOKEN_TO_BE_REPLACED

Far from being an animation expert, in my training courses, I always wanted to show my students a … END_OF_DOCUMENT_TOKEN_TO_BE_REPLACED 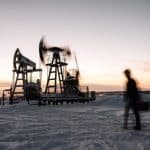 I am very happy to present here a webinar series on well cementing for my Spanish-speaking readers. … END_OF_DOCUMENT_TOKEN_TO_BE_REPLACED