Trapped pressure is always something to be aware of in cementing. A common objective of the primary cementing operation of intermediate casings is to have the top of the cement at the surface. In some cases, due to the presence of losses during or after the cement placement, this objective is not achieved. This means that the annular space between intermediate and surface casings is left uncovered.

In the past, I have seen some companies attempting to inject cement through the side valves. This is sometimes to have a ring of cement close to the surface. Or, to repair the previous casing shoe following losses during primary cementing.

This procedure can be called a ‘Top Job Squeeze’ because it implies squeezing fluid below the previous casing shoe while pumping cement from the top. However, there is a challenge due to the typically large volume of the casing x casing annular space and uncertainty of the injection behavior. (Leaking formation might get plugged). The cement slurry pumped from the top might partially fill the available volume before reaching the maximum allowable squeeze pressure.

When the intermediate casing is part of the completion (in case of a production liner), the situation described above creates the conditions for a ‘trapped annulus’. This is the result of a confined liquid (typically water and/or mud) between the two casings being exposed to a temperature increase during production. The result is an increase in thermal expansion and an incidence of trapped pressure. This pressure increase under certain circumstances can result in damage to casings and outer cement.

See an example case below, with an assumed 9 5/8” intermediate casing. (Partially covered with cement). This is followed by a 7” production casing (With a designed TOC well-below surface). 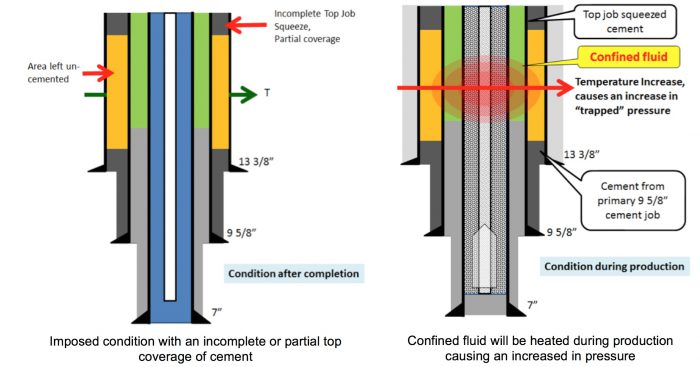 The relationship between the thermal expansion and pressure increased for this hypothetical case is presented in the following graph.

The chart shows that an increase in temperature of only about 16 C already puts in risk the integrity of the surface casing and its outer cement. Later a further increase up to 30 C can result in the collapse of the intermediate casing with severe damage to the production pipe.

This post only defines the problem of trapped pressure from incomplete cementing in general terms. Please if you have any comments, questions or require more clarifications let me know in the space below. 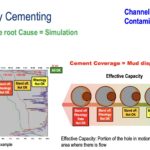 If we consider the main variables to ensure proper mud in hole replacement with cement: stand-off, … END_OF_DOCUMENT_TOKEN_TO_BE_REPLACED

In recent weeks, I received some reader requests to include cement job processes or procedures as … END_OF_DOCUMENT_TOKEN_TO_BE_REPLACED

This article will provide you with some actionable suggestions for cementing across permeable zones. … END_OF_DOCUMENT_TOKEN_TO_BE_REPLACED

Forensic is a term usually associated with crimes. Criminal forensics is the use of science to … END_OF_DOCUMENT_TOKEN_TO_BE_REPLACED

First, here is a handy table to simplify the process of cement slurry design: Additive … END_OF_DOCUMENT_TOKEN_TO_BE_REPLACED

Though I am far from being an animation expert, during my training courses I have always wanted to … END_OF_DOCUMENT_TOKEN_TO_BE_REPLACED